How The Grinch Stole Christmas

Starring:Jim Carrey as the grinch 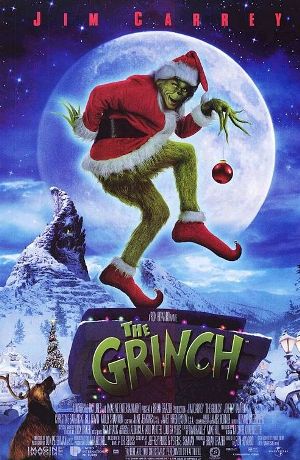 Is It all starts out with some loved childern enojying the chritmas spirt in their town called Whos until the grinch (Jim Carrey) comes down from his mountiantop house with his dog (max) and tires to ruin the christmas spirt the children and parents are having.The grinch had an anger against christmas.Every christmas he would go down to Whos ville and steal all te decorations,and the gifts from their homes. he started to hate it because when he was on school they made him bring in a christmas girft he had made it himself and when he showed it to the classroom the girl he had a crush on made fun of his christmas gift that made eveyone laugh at him so he became to get an anger toward christmas. At the end of the movie the grinch becomes to love christmas because Cindy luo talks to him about all the great things about christmas. He tried to ruin christmas again but his plan had failed and started to make a circle around the christmas tree with the people from Whos ville and never again did he hate

My opinion of this movie would have to be amazing. Its aactually one of my favorite movies because of the way everything coordinates itself. I love the way they have the grinch act as the one to hate christmas and then have him like it and change his mind towad the end because of the little girl cindy.I like the way that he had a crush on the girl in his class and because of her he started to hate christmas. My overall opinion of this movie is great and a family comedy movie and I think everyone should watch it.